In the last couple of days the issues related to the implementation of alternative food systems have been largely featured in the UK media. The BBC touched on the topic of alternative food systems through its “Cuba and Urban Gardening” edition of Radio 4 – The Food Programme, and its “Urban  Farming Takes Root in Detroit” article pertaining to urban agriculture (BBC NEWS – World – Americas). The interest in the topic has largely been provoked by the Capital Growth initiative of the Mayor of London Boris Johnson, whereby 2,012 new food growing spaces should be established in London by 2

“Cuba and Urban Gardening” shares views and commentary on the experience of Cuba in the 1990s when the country entered a “Special Period in Peace Time”. Sacrifices in living standards, insufficient food supplies and a drive towards self-sufficiency in the food sector dominated the period.  Cuban researchers, policy-makers and producers were encouraged to eschew agressive agricultural techniques on the basis of necessity because agrichemical inputs such as pesticides and fertilizers were not attainable at the time.  Additionally, there was very limited access to fossil fuels for the transportation of food produce from the countryside, where it is naturally grown, into  urban areas.  As a result, sprung initiatives promoting urban organic agriculture.  These were aimed at meeting the nutritional needs of urban dwellers through the use of urban spaces for the organic production of foodstuffs.  The program was also aimed at improving the recycling and use of urban waste. 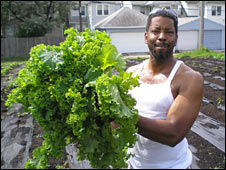 “Urban Farming Takes Root in Detroit” introduces the work of Urban Farming, a Detroit-based charity aimed at reducing inner city hunger through the growth of agricultural produce on unused urban land and the distribution of the produced food among hungry people.  The idea is very simple: turn wasteland into free vegetable gardens and feed the poor people who live nearby.  Motown has lost more than a million residents since its heyday in the 1950s and it is common to see downtown residential streets with just a few houses left standing. Taja Sevelle saw the hundreds of hectares of vacant land in the city and came up with the idea of creating an organic self-help movement that would be “affordable (and) practical”.

Even though, on the surface ot it, the experiences of people in Cuba and Detroit might appear a long way away from the design of mobile marketplaces in developing countries, I am inclined to think otherwise.  In the current age of global warming and oil price shocks the localisation of food production appears to be a public policy imperative on a worldwide scale.

The mobile market design problem for developing countries is inextricably entwined with the problem of improving the food supply chain in developing countries and the problem of creating food supply systems, alternative to the currently dominant industrial food supply chain, in developed countries. Traditionally, aggressive agricultural techniques and drives towards agricultural exports have been regarded as a prime road to development and poverty reduction in many LDCs. In the current global environmental situation, the solutions to both of these problems demand re-thinking.

The Cuban experience can be seen as an inspiration for the efforts of people in industrialised countries to find alternative food systems. It is a story of adaptation to the constraints of a “fuel famine”, assurance of food self-sufficiency and nutrition.  The film The Power of Community: How Cuba survived Peak Oil illustrates that story.  What about developing countries? How would smallholders there be able to improve their livelihoods if/when advanced industrial countries manage to improve their food self-sufficiency?